The BTP Futura, Italy's only government bond reserved exclusively for individual savers (retail), was issued for the second time between Monday 9 November and Friday 13 November 2020 (until 1 pm).

This second issue was in line with the commitment undertaken at the time of the first issue, pursuing the two-fold objective of increasing the number of retail investors in public debt by involving them in the ongoing efforts to tackle the consequences of the health crisis and relaunch the Italian economy.

In fact, as was the case for the first issue, all proceeds will go towards supporting Italy's recovery, strengthening the national health system, implementing measures to protect jobs and supporting families and businesses.

The aim of this issuance is to effectively manage public debt given the emergency situation, as described in the updated version of the 2020 Public Debt guidelines.

Small investors and private savers in general have very much appreciated the new approach of linking public debt to specific objectives.

For the first time, both the BTP Italia issue that was completed in May 2020 during the full lockdown and the BTP Futura issues in July and November were entirely aimed at financing measures to cope with the Covid crisis; through these issues, Italians invested a total of around € 25 billion in the country's recovery.

The second issue of the BTP Futura: main characteristics

Duration of the security

The second issue differred from the first in terms of its duration: 8 years. In a market context characterised by even lower rates than those recorded in July, this new BTP Futura issue, with a reduced duration of 8 years, will make it possible to take full advantage of the positive effects of Italy’s GDP rebound on the final premium. In fact, as indicated in the Update to the 2020 Economic and Financial Document, average nominal GDP growth is expected to be even higher than 3% over the next few years.

A security that grows with the Italian economy

This security “grows as Italy grows”, offering a “loyalty bonus” that is added to the last coupon, equal to Italy's average annual GDP growth rate as recorded by ISTAT (Italian National Institute of Statistics) over the life of the security; this loyalty bonus has a guaranteed minimum of 1% and may reach up to a maximum of 3% of the subscribed capital, for those who purchased it at issue and hold it until maturity. 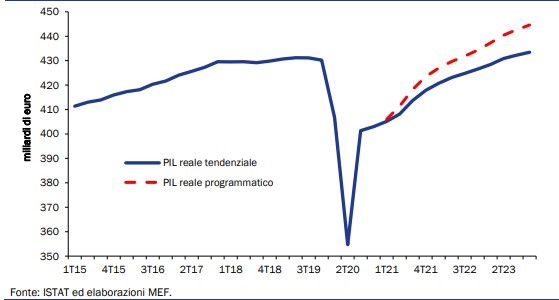 A simple structure with fixed rates that increase over time

This new security has another distinctive feature: half-yearly nominal coupons calculated on the basis of pre-established rates that increase over time (the so-called “step-up” mechanism); these rates are calculated on the basis of a given fixed coupon rate for the first three years, increasing a first time for the following three-year period and a second time for the last two years of the security’s duration, up until maturity.

The predefined coupon rates that shall increase over time were disclosed on 6 November and confirmed on 13 November:

The security was placed on Borsa Italiana’s MOT platform (the electronic bond and government securities market), making it possible to subscribe also through the various home banking platforms, if authorised for trading, and through the dealer banks, Intesa Sanpaolo spa and Unicredit spa, and co-dealers, Banca Akros spa and Banca Sella Holding spa.

In order to minimise people's movements, many banks also allowed their customers to “reserve” the security remotely, offering a number of alternative channels, including digital options.

The security was subscribed at par (100) and without any additional commission. Furthermore, subscribers were not charged any purchase commission during the placement period and the usual reduced tax rate of 12.5% for government securities shall also apply to the relative yield, as shall the inheritance tax exemption, as is also the case for other government securities.

There were no caps or allotments, allowing for demand to be fully satisfied, starting from a minimum subscription of € 1,000.

A “special” ISIN code for the second BTP Futura issue, IT0005425753, was used to identify the security on the MOT during the placement period (9-13 November), making it easier to recognise entitlement to the relative loyalty bonus for those who hold the BTP Futura until maturity.

In consideration of the current circumstances and to encourage as many investors as possible to take part, the placement period was guaranteed to last for five days, with the possibility to purchase the security at banks and post offices or online using internet banking, if authorised for trading.

Operators offered simplified digital procedures to open a securities account or to “physically” purchase the BTP Futura at a branch, allowing customers to “reserve” the security.

Results of the second issue of the BTP Futura

123,717 contracts were concluded during the second issue of the BTP Futura, dedicated to financing measures to combat the Covid-19 emergency; this issue was held between 6 and 13 November 2020 and raised a total of € 5,711.308 million.

According to the information gathered from dealers, co-dealers and other intermediaries, it would appear that more retail investors took part than private banking investors (54% and 46%, respectively). With regard to the amount subscribed by retail investors, it is estimated that approximately 63% placed their order through banking network branches (either by physically visiting their branch and by placing their order remotely), with the remaining 37% using home banking.

Details on the composition of demand can be found in the press release by the Ministry of Economy and Finance.

Negotiability and liquidity on the secondary market

The security may be sold before maturity, under market conditions. The fact that this security has a structure with fixed coupons that increase over time means that it is less subject to a reduction in market value should interest rates rise in the future, unlike the case for a normal fixed-coupon BTP with the same maturity.

The security has been given adequate liquidity on the secondary market, allowing investors to sell or purchase it throughout its duration, under all market conditions.

Should the security be sold on the secondary market, from the settlement/entitlement date onwards (17 November 2020), the “special” ISIN code is replaced with the “standard” ISIN code IT0005425761.